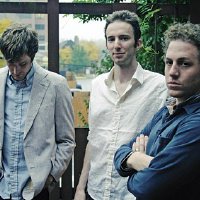 >> Fans of the seepage of indie rock into the popular culture will find their ears oddly pricking up should they find themselves seated in front of a television viewing a current New Balance shoe commercial. The music featured… it's on the tip of your tongue… it's… it's… The Mobius Band's "Starts Off With A Bang" from the City Vs. Country EP. Incidentally, we don't think this is the indietronic trio's first dalliance with music licensing. We heard some talk last year about a phone maker licensing a tune for a corporate presentation. Please, please God: Let this indie thing go so crazy that Mobius Band gets to design their own shoe and track jackets. We'd definitely buy 'em. So what's the trio up to these days? Writing new material and touring with Editors and Stellastarr* (the asterisk as far as we can tell is supposed to remind you that Stellastarr does not equal Starsailor), that's what. Since we've led you this far along, here are some tour dates:

>> BoingBoing here points to artifacts of an amazing time in rock culture, a time when David Bowie (well, Ziggy Stardust) was featured in a surely fan-created superhero comic in which he fought crime alongside Batman, Ozzy, Freddie Mercury and Mick Jagger. Simply astonishing. We heart the Internet.

>> Last fall we were sort of taken with the idea of MySpace Records, well, taken might not be the word, more like curious to see if the social networking behemoth can sell records to its more than 50 million registered users. Well, according to DigitalMusicNews the first MySpace Records comp has only sold fewer than 50,000 copies. Now, that sales performance is probably reflective of the quality of the music on the CD. But either way, it sets up some simple math. Assuming all the sales of the record were to MySpace users (seems unlikely), MySpace has only been successful is selling the record to a tenth of a percent of its user base. We were once told by a chap in the direct marketing field that a successful direct marketing campaign will convert into a sale 2% of the time. Perhaps MySpace should have just used junkmail to market the record. Here's Coolfer's take.

>> Nu-metal progenitors Helmet have signed with indie label Warcon, which will issue a forthcoming Wharton Tiers co-produced record. According to PunkNews band leader Page Hamilton has already written some music for the set. A bit more info here.
Posted by Unknown at 3/02/2006 07:15:00 PM

I was kinda taken by the label as well. Well, taken may not be the word...but I was definitely intrigued when MySpace started a label.

The MySpace album sold primarily at chain stores and mass merchants (Target, Best Buy, et al). Doesn't look like it non-traditional sales (online) accounted for much of its total.

People obviously didn't buy the album after seeing ads for it on MySpace. The site is great for tour dates and audio streams and connecting people, but there's not much to show that it gets people to buy music.

When they release an album by a band, get the band out on the road, and if they aren't heavy-handed in how they use MySpace to promote it, the label could do OK. But they'll need to do all the things labels do to promote and work and album (see my post on Victory Records from this morning) to make it successful. If they depend on the site to sell it...it'll be a failure.

I think 50,000 is remarkable sales on a compilation full of LP tracks on an indie label.