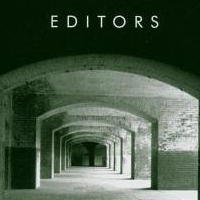 After a dry spell last week, AOL Music is back on the block with your pre-release album stream hook-up, which will help you answer this week's biggest question: Is the new Liars record really as good as the hype? We'll save you a bit of work and tell you that indeed, it is pretty damn good. The band's current singular and minimalist sound, abetted on Drums Not Dead by the spooky-sounding Cold War-era studio in Berlin, Germany that the band used, is particularly tactile and evocative. Also working a particularly moody vibe is Editors. Sure, they're regularly derided for sounding like Interpol, who of course in turn sound like Chameleons UK and to a certain extent Joy Division. But Editors have got some pretty great songs, not the least of which is the lead-off cut to The Back Room, "Lights." Make sure to stream that one, and "Camera," that's a good jam too.

We've already touched on our reservations about Josh Rouse's music here at The Bacon, but that said we have to acknowledge that we've been listening to the record quite a bit. We can't help but feel the music is veering into territory more regularly traveled by soulless acts like John Mayer and Jason Mraz, but there is something undeniably charming and serene about the Rouse's melodic set that keeps us coming back. Finally, Royksopp's friendly dancetronica is at least worth a spin on your computer, if not a run out to the store. Links below go to happy AOL rock streams and related commercial opportunities with our old hall monitors at Insound.

Elsewhere: There's a bit of signing in to do, but, if you can work up the unslackness to do that, NME is streaming the new Yeah Yeah Yeahs record Show Your Bones [Link], which streets tomorrow. The British hype sheet has also got the forthcoming Flaming Lips record [Link], which we've listened to several times in the last month. It still ain't grabbin' us.
Posted by Unknown at 3/20/2006 06:52:00 PM