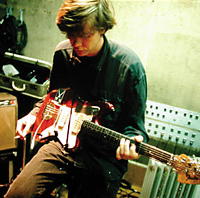 >> Pfork had an exlusive on news today that Sonic Youth's next record will street on June 6, which also happens to be the sixth day of the sixth month of the sixth year (think number of The Beast, people). The band is expected to support the set via a tour with the Flaming Lips. In other Sonics or at least Sonics-related news, Thurston Moore has inked a deal to distro his eclectic label Ecstatic Peace's music through corporate megalith Universal's Fontana distribution arm. Moore also will be working with Universal proper to develop artists and release their records. Here's the link.

>> We hope everyone recognizes the Eazy E homage in the Natalie Portman gangsta rapper clip that has been blowing up on the Internets since it aired on Saturday night. Here's some discussion and a link to the clip at BoingBoing. If memory serves, there is some direct and paraphrased lifting from the N.W.A. classic "Gangsta, Gangsta." [UPDATE: BoingBoing asserts the Portman jam refers to Eazy E's "No More Questions," some cat at Stereogum's comments hears Sir Mix-A-Lot].
Posted by Unknown at 3/06/2006 06:32:00 PM