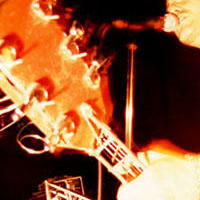 We've surprised at least one person with the news that we didn't stick around for Friday night's set by J. Mascis' newish Witch project at Cambridge, MA's Abbey Lounge. There's more than one reason for that, but the most important one is that the second set of the night from Boston's Neptune was the most surprising and electrifying performance we've seen since last spring's Gang Of Four show. No one should have had to go on after those dudes, and it isn't a slag on Black Helicopter, owner of the night's third slot (Witch was headlining), when we say that they just couldn't ride the residue of the vibe Neptune was giving off that night. Seriously, as soon as these guys (who have been at it for 12 years and started their act as a sculpture project) hit their first downbeat our jaw simply hung slack.

The lads behind Neptune make their own instruments and their music sounds like (to use the lamest music writing construct there is) a mix of Polvo and Shellac. The trio was totally going for it Friday night, hyperkinetically owning but consistently threatening to careen off the club's small stage. The homemade gear added to the mystique a bit too, as one of the guitarist's axe had a headstock shaped like a scythe that seemed to regularly threaten to impale anybody on or close to the stage. The band is issuing a full length called Patterns in April on Self Release Records and touring throughout that month and into May. There are some cuts posted at the act's MySpace outpost here, although the one we checked out didn't seem to fully translate the band's wicked live mojo. Here are the tour dates: