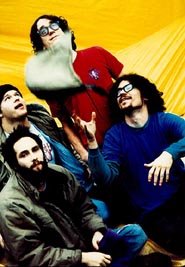 So the Built To Spill tour, recently delayed because a certain indie rock guitar hero suffered a detached retina in an unspecified incident, is now rescheduled. According to PunkNews.com, Doug Martsch and his cohorts in Built To Spill will hit the road to support the forthcoming release You In Reverse for six weeks beginning in the second week of June. A second leg of about equal length kicks off in the second week of September. Sandwiched inbetween is the act's appearance at Lollapalooza in Chicago August 5. Click here and check out all the dates at PunkNews, because we're going to move on to having a look at Martsch's past. Incidentally, You In Reverse streets April 11.

We wonder how many people know that Martsch used to play in the excellent indie rock outfit Treepeople (pictured here left). Treepeople recorded for the Seattle indie label C/Z from 1990-1994, around which time Martsch left to form Built To Spill back in his native Boise, Idaho. For our money the best Treepeople cut, and the best Martsch cut ever, is "Liquid Boy," the opening track on 1992's Something Vicious For Tomorrow (we presume since Martsch sings its his jam and not the work of other guitarist and songwriter Scott Schmaljohn). From the same record and perhaps more widely known because of a double split 7" [Sonic Bubblegum 16 from 1994, we found it for $.49 a couple years back] with Archers of Loaf is the track "Funnelhead." Thanks to the good folks at IODA, we're able to offer you that track for download below. As an added bonus we're also offering a cut from another one-time C/Z act Silkworm (again, not our favorite song from the amazing Silkworm record In The West, but it's still a damn good song). Download your little hearts out and relive the '90s glory.