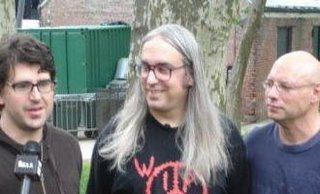 We saw Dinosaur Jr.'s J. Mascis outside the club he was playing with his new (not nu, umlaut over the "u") metal act Witch Friday night talking on a cell phone of all things. There's really nothing as un-slack looking as a musician sitting outside a club on a cellie, and the sight caught us off guard. Remember all those articles in the early '90s dubbing Mascis the pontiff of the slack generation? Anyway, more recently we read somewhere (we think it was an interview of Lou Barlow) that Mascis' relatively active last year or so is due to his taking on new, more hands-on management. We don't care what's behind it, we're just glad to have seen the original lineup of Dinosaur rock the Middle East in December. Life affirming, it was. Anyway, Dinosaur has a few weeks' worth of dates slated before heading over to host a segment of the All Tomorrow's Parties thang in the U.K. in May. We've got the U.S. dates listed below in a handy chronological format. Do yourself a favor and show up for one of these.