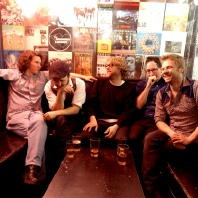 >> Pfork had an exclusive this morning on news (which Vagrant posted around lunchtime) that classic rock revivalists The Hold Steady, creators of one of our favorite discs of 2005, signed to Vagrant. The label, which rose to prominence on the popularity of various Emo acts, is also home to legendary drink-- errr, legendary rocker Paul Westerberg, former fronter of The Replacements. So the signing seems an appropriate match. Vagrant says the Brooklyn-based act will begin recording its third set, the follow up to 2005's veritable rock clinic Separation Sunday, in May.

>> Stars co-fronter and Broken Social Scene cohort Amy Millan will issue a solo set May 30 on Arts & Crafts titled Honey From The Tombs. Or at least that is the Canadian release date, we're not sure if the disc populates American racks that day. Anyway, the 12-tune set arrives three years in the making and was recorded at various studios with assorted members of Stars, Broken Social Scene, Do Make Say Think and Metric. Ms. Millan plans to support the disc with a tour of Europe and Canada this summer. In the meantime, you can download a track (it's in a .zip file, but that ain't no thang) from the forthcoming record here. The track is called "Skinny Boy" and it’s a very satisfying piece of indie pop.

>> TV On The Radio to tour with new labelmates Nine Inch Nails. Seriously. We think we'd be interested to see that if it likely wasn't going to be in a gigantic arena. Billboard has the nooz.

>> A decidedly more electronic-sounding Uzi And Ari, the musical vehicle of Utah-based Ben Shephard, returns next month with a sophomore record It Is Freezing Out. The indie rock act, which was first brought to our attention about a year ago by the lads over at Music.For-Robots, will be touring much of the west during April and May. More information here.

>> A brief addendum to yesterday's Cure item: Apparently the concert film "Cure In Orange" is also getting issued on DVD later this year. No more details, but here's the link to that Cure reissues thread at ILM anyway.
Posted by Unknown at 3/15/2006 06:44:00 PM