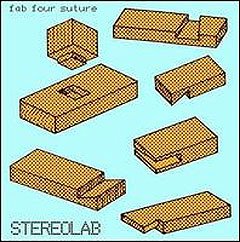 AOL Music has the hook-up for full-album streams for records including the new Stereolab, Mogwai, Goldfrapp, Nightmares On Wax, Coldcut and Thievery Corporation joints. The first three are fairly crucial listens for the week, and we've got links to all the goody goods below.

>> Stereolab: Fab Four Sutures. Six old and six new tunes. Sufficiently and typically blissful, busy and groovy. That the band has been so consistently good for so long, and sometimes exceptional (Dots And Loops, in our humble opinion), is quite an accomplishment.

>> Mogwai : Mr. Beast. Definitely check out the track "Travel Is Dangerous," its our favorite track the band has done since it released the epic "My Father, My King," although it's an altogether different, uh, beast.

>> Goldfrapp: Supernature. Gets particularly good in the middle third, where the songs aren't as clunkily rhythmic as the opening stretch, before heading into area that can only be described as downright dreamy and Yaz-tastic during "Time Out From The World" and "Number One." The set concludes with the slamming marcher "Beautiful."