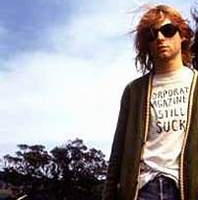 >> Rolling Stone reports here that Courtney Love has indeed finally sold off a share of her rights to the Nirvana catalog. Love, whose stake in the enterprise includes 98% of Nirvana's publishing rights, sold off 25% of (presumably) the total publishing rights to former COO/GM of Virgin Records Larry Mestel, who now operates Primary Wave Music Publishing. The deal was apparently worth in excess of $50 million USD. In more curious news, apparently ex-Vatican Commando Moby is producing Love's next solo outing. Weird.

>> Word on the Matador message board here is the laser engraving on the Mission of Burma singles series vinyl records continues to hamstring their production. The manufacturer's latest estimate is shipment of product to Matador on Friday, and shipment on to subscribers could occur sometime next week. Keep watching your mailboxes, kiddies.

>> Interpol is not signed to Interscope, according to the Pfork. At least not yet. Coolfer sticks to his guns here. We think it's a sucker's bet to bet against Coolfer, dawgs. That guy is six different kinds of on the ball.

>> Johnny Marr says The Smiths have turned down as much as $10 million to reform, according to this NME article. We bet if there wasn't litigation among the members over financial whatnot, one of these offers would have been taken. What incentive would Moz have to reunite the quartet if he has to turn over his paycheck to Rourke or that other guy, which ever one has successfully sued him.

>> More Mats: Paul's Page posts the track list for the new Replacements best-of set and offers details on all the various irons in the fire. Here's the link.