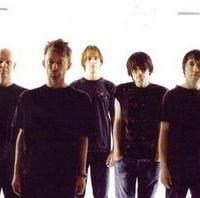 >> If you put all the various items posted today about Radiohead together, you start to actually get a bit of interesting news. Jonathan Cohen's Billboard report was the best, as you might expect. Pfork here was particularly jazzed (at least at first, it appears the item has had an update or two since this morning) that Radiohead was going to tour. We were pleased to read that Yorke and the boys would be playing new material on tour. And Cohen's report included the band's statement (as well as some material lifted straight from this DeadAirSpace post) that the band "will also be releasing music to download when we are excited about it, rather than wait 12 months for a full-blown album release." This hints Radiohead might be thinking about foregoing a label deal in the near-term. Mostly, though, it's just pretty darn exciting that the band will finally get something new in listener's ears.

>> Coolfer Glenn here drops knowledge that Interpol has signed to Interscope. And really, with that name, where the hell else were they gonna sign? Except maybe just go straight through the Interweb? They sell too many records to throw away a perfectly good career trying that out. So to Interscope they go. We've said it before and we'll say it again: remember when the only interesting band on Interscope was Helmet? Also, Coolfer redesigned. We dig.

>> So apparently Brian Eno is *not* back in Roxy Music. ILM shines the beacon of truth here.

>> Anybody sign into their Amazon account recently and seen a Digital Locker feature in there? For all we know it's been there for months, nay, years, but it certainly looks new. Ours, which we discovered this morning, is currently empty, even though we purchased a couple records over the weekend (CD versions of New Order's Low Life and Jesus And Mary Chain's Psycho Candy, if you must know). If we were the betting sort we'd say what we discovered this morning was the nuts-and-bolts of the much-talked-about Amazon.com digital music plan. If you've read articles like this one, or maybe this one, you know the vaunted online book e-tailer is supposed to be developing a digital play that will let those who purchase items for Amazon receive digital copies as well. The Digital Locker we're looking at right now is set up with section for "Bookshelf," "Music Collection," and "Video Collection." Have to say, we wish it *had* given us instant access to Low Life, since the whole reason we bought it was because we were too lazy to go to the basement and get the cassette out of an old Yuengling box.
Posted by Unknown at 3/21/2006 09:15:00 PM