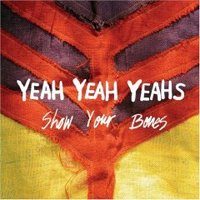 AOL Music keeps the free music gravy train rolling this week with full-album streams of the new Yeah Yeah Yeahs record, the Ghostly International comp and selections from The Pretenders box set. A substantial portion of the Yeah Yeah Yeahs hotly tipped and typically aggressive Show Your Bones is comprised of three-chord garagery and Chrissie Hynde-apery. But there are several highlights, including the cut "Way Out," which injects some much-needed melody into the set, and "Cheated Heart," our favorite cut from the record which approaches Bettie Serveert-levels of jangly excellence. Why isn't this song the first single? If we had our druthers we'd sequence the YYY's record completely in reverse. AOL will let you play the tracks in any order you want, so why not listen to it our way for kicks?

As for the Pretenders' stuff, you've heard most of it before, but it's worth checking out Hynde and Co.'s take on Morrissey's "Everyday Is Like Sunday," which gets a slick Nashville makeover with loads of extra strings and pedal steel guitar. Certainly not as good as the original, but that's not a surprise, is it? Links to the goodest of the AOL goods for the week below:

>> Bonus Round: NME is streaming the new Morrissey record Ringleader Of The Tormentors here. If you believe writer Douglas Coupland it is the greatest thing since sliced bread, although we read over the weekend someone called it "disappointingly familiar" or something to that effect.
Posted by Unknown at 3/27/2006 07:30:00 PM