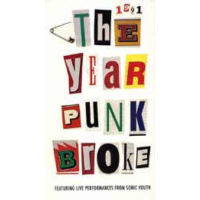 >> Don't think we've seen this reported elsewhere yet: That forthcoming Sonic Youth record? According to a recent post at the band's site it seems the Youths have decided on the title Rather Ripped. We'd read elsewhere the band was also considering the title Rocked Up. The SY site also lists some tracks making the cut and offers details about the recording sessions. Including the interesting note that some of the vocals were cut in J. Mascis' home studio in Amherst.

>> Speaking of the Youths and Mascis, word on the FreakScene message board is that the long-awaited DVD of the concert film "1991: The Year That Punk Broke" has been completed for two years and is stuck in purgatory over at Universal. The film, in case you've never seen it, contains some amazing footage of Sonic Youth, Dinosaur Jr. and a quaint little act called Nirvana touring and playing live. The message board aims to find contact info for the appropriate person at Uni and then set up a form so that fans can hassle The Man until the company issues the DVD. More info here.

>> Morrissey told an audience during an appearance at SXSW Thursday that The Smiths turned down a $5 million offer to reunite and perform at this year's Coachella festival next month. Billboard has the news here.

>> We were planning on completely ignoring SXSW coverage and simply reserving our discussion of the rock pageant to our earlier commentary about how everyone jocking it so hard really bores us. But then we read some coverage that spoke to us. So here's our endorsement: The only SXSW coverage really worth reading is Joey Sweeney's for Philebrity. Here's today's ration.
Posted by Unknown at 3/16/2006 08:04:00 PM