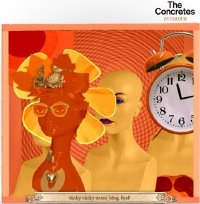 >> An email from Astralwerks points us to the new Concretes interactive media player here, which streams a bit of each song on the band's new record In Colour. Indie label Hydra Head (not The Concretes' label) has offered full-album streams for many recent releases, and we've been turned onto some great records as a result (Logh's A Sunset Panorama, anyone?). Too bad The Concrete's tunes fade out after a minute or so, but it's still a nice little taste. The interactive player takes a tip from the cover of In Colour and lets kids design what amounts to their own version of the album's cover art: check out our effort posted here at left. But the best thing about the player, of course, is the music. The new set streets April 4 and to support the release the band will play a few weeks' worth of U.S. dates, which we've listed below.

>> Domino has posted the video for the excellent first single from British electro-twee duo Psapp's forthcoming new set here. The tune is called "Tricycle" and the video is the stop-animation tale of an attic-dwelling mouse who falls for a teddy bear. It's a poignant little number we can see listening to quite a lot when the new record The Only Thing I Ever Wanted streets May 22.

>> How about some more videos? Here's two classics from Sunny Day Real Estate found over at YouTube: the magnificent track "Seven" and "In Circles" from the band's 1994 Sub Pop debut Diary (best album art ever). Here's a zany animated video from The Heavy Blinkers' pop-tastic "Try Telling That To My Baby." Great song, great video. And finally, Josh Rouse completes his conquest for our hard-won affection with this winner, a video for the opening cut off his latest record Subtitulo. The track is called "Quiet Town," here's the video.
Posted by Unknown at 3/26/2006 01:46:00 PM